A B Wood Medal 50 Year Anniversary 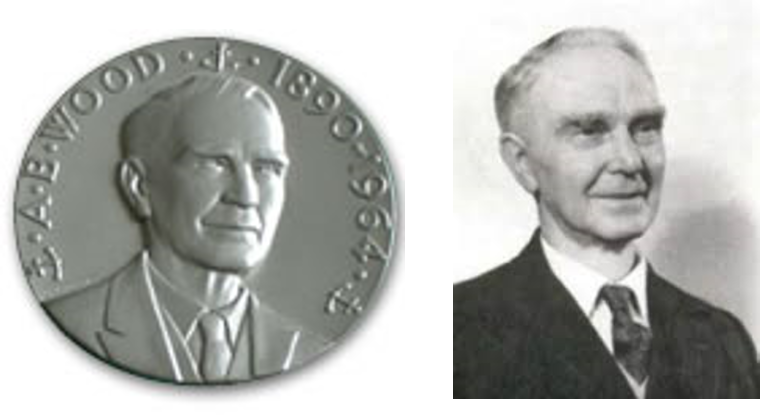 The A B Wood medal and attendant prize is awarded in alternate years to acousticians based in the UK/Europe (even years) and in the USA/Canada (odd years). It is aimed at younger researchers, those who are aged under 40, whose work is associated with the sea. Following his graduation from Manchester University in 1912, Albert Beaumont Wood became one of the first two research scientists at the Admiralty to work on antisubmarine defence. He designed the first directional hydrophone and was well known for the many contributions he made to the science of underwater acoustics and for the help he gave to younger colleagues.

You can hear about A B Wood’s career as part of the sequence of interviews with key researchers in the history of sonar that were recorded during the preparation of the book “Seek and Strike” (Willem Hackmann) and that are available here (the interviews have been digitised from standard C90 cassette as part of a UKAN archives project).

You can see the A B Wood Medal video here.

Prof Gary Heald explained that the original plan had been to hold a special session at the ICUA 2020 where past recipients could present a paper on some of the research that they have done since receiving the medal. This was not possible due to the COVID-19 pandemic as the conference became a virtual event held on just one day. As this was a special anniversary year it was felt that something should still be arranged to celebrate it and mark the occasion.

Dr Duncan Williams (chair of the Special Interest Group Underwater Acoustics) suggested that a video could be produced featuring an introduction by the IOA president to explain the A B Wood Medal followed by past recipients giving a short presentation about receiving the medal and some of the things that they have done since. The suggestion was well received by the IOA and many of the past recipients who enthusiastically engaged with the project under the direction of Gary.

Gary went on to thank UKAN for their co-production of the video and to thank all of the past medal winners who had taken part in celebrating 50 Years of the A B Wood Medal.

Following the showing of the video, Dr Anthony Lyons made a few closing remarks and reminded conference delegates that the process of nominating someone for the A B Wood Medal is on the Institute of Acoustics website and on the Acoustical Society of America website.

Since the showing of the video, a number of people, including a number of past recipients, have commented that they found it truly inspirational.

You can find a list of past recipients here.

Register now to be part of The UK Acoustics Network